I don’t think I ask for a lot from my kids. But when I ask for chores to be done, you’d think I’d asked for an addition to be built onto the home! Read about the struggle via Chores – Hot Mess Memoir

Despite asking my 13-year-old several times for pics from his Washington DC school trip, I’ve received none. Turns out, I’m not the only one being ignored by their teenager. Click here to read the hilarious screen shots of other parents being ignored via So I’m Not the Only Parent Ignored by Their Teenager? – Hot Mess Memoir

I’m just going to say it, Get Air is the waiting room of hell. Check out my latest post via Get Air Indoor Trampoline Park – Hot Mess Memoir

We’re diggin’ deep into subscription boxes and how I can’t wrap my head around it! Listen, like and follow via Subscription Boxes Podcast Episode 4 – Hot Mess Memoir

As my son slid gracefully down the basement stair steps, I kinda became envious and wanted to mimic him. Unfortunately, I did not have the same swan-like success. Here are the videos of him vs. me. 🙂 via The 10-Year-Old Vs. the 42-Year-Old – Hot Mess Memoir

Here is my post regarding a child being exploited in a town just 30 minutes away. It left me disgusted and outraged. Watch the video and decide for yourself. via Hot Mess Memoir – A humorous, honest, hot mess approach to life!

What my son sees upon waking: 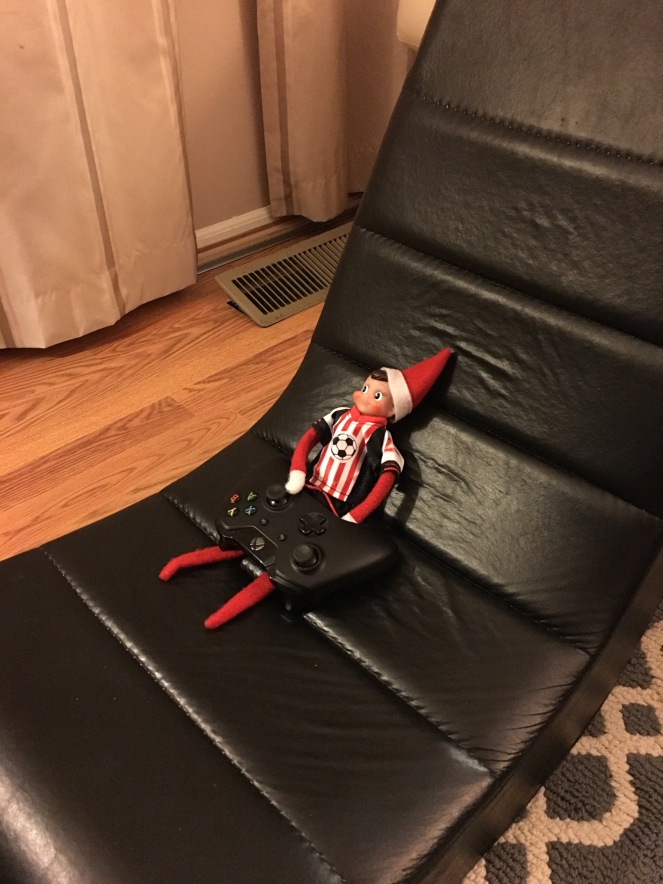 A delightful little elf named Zipper just wanting to play video games. In fact, he even has his own special soccer uniform, because I am that good.

Adult version of Elf on the Shelf: Zipper has hit rock bottom. He can no longer afford the prescription drugs on his TSA salary that he buys from college students (ritalin, adderall, xanex). He looked over to see his keyboard cleaner and had amazing  idea- high on ritalin. 2 hours later, he can’t feel his own face.

If you want a game that tears families apart, play Monopoly. It will make siblings not talk to each other for days and children angry at their parents. Go on, I dare you.

Let me first say, I LOVE Monopoly. I have been playing it since I was probably 12. In addition to my Father owning a restaurant, he was also Real Estate Agent. This made him an automatic lover of Monopoly. Because he worked 70 hours a week, we would really only play it once a year- during our mini vacation to Port Clinton, Ohio. On the 1 night we were guaranteed it would rain, my dad would spread the board out as I fought with my sisters on which piece we would be. I always wanted to be the car. Who wanted to be the stupid candlestick? The candlestick is so stupid. This isn’t CLUE here peoples.

2.5 hours after the game began, I was cashing in every property and white, 1 dollar bill I had to pay my Father the Boardwalk rent I owed. I had clearly copped an attitude and was a little bitch for the remainder of the night.

Fast forward 25 years and I began to play with my oldest. A few years later I taught my youngest. Both caught on easily yet every single time we played ended in a meltdown. I even have the oldest on video crying and screaming.

“But I never LOST! You don’t know what it feels like!” It’s the funniest thing.

Today I had a plan that was fail proof and resulted in more time with my sons and bonding between brothers.

“Boys, I have a proposition for you.” I announced as they slayed another pirate in Assassin’s Creed.

“At 3 I want to play you both as a team. If you guys win, I will buy you Shamrock Shakes. If you loose, you have to clean the junk drawer.”

Both of them were on board in minutes and I thought I had finally found a plan where it wouldn’t result in sending one or both to their rooms.

At first both of them were on fire. They both rolled one dice each and always seemed to get doubles. They were buying up properties left and right. They were making bogus deals with me that I was gun ho about, just so I could loose and they could win.

Then shit hit the fan. For once, things went my way by every stupid roll of the dice. Actually irony kicked in and I guess things didn’t go my way, which was to loose. Every f’ing turn I would skip their 3 properties laden with houses. I would always land on free parking and collect the dough.

In turn, the boys had the opposite luck. They landed on the “income tax” 3 times in a row where you have to pay 10% of their money or $200. They went to jail twice. They landed on my railroads twice in a row then landed on my property where they were to pay me $200 but I lied and said only $100. When I said “don’t worry about paying me,” P became the martyr and wouldn’t hear of it. C began to cry at every roll. They took turns earlier reading the chance and community chest cards. Now they were fighting over who’s turn it was.

I tried to explain to them that what they thought was a bad situation wasn’t bad at all. Despite me having $700, they had 4 houses per property which equated to a combined total of $600. Did I do the math right?

“Can we just quit now and clean the junk drawer?” C asked.

“No! I want you to keep playing!” I was determined to loose more than ever.

“What? You want us to keep playing so you can watch us loose more?” P asked in a snotty tone.

“Oh my God, no. I’m just saying things aren’t as bad as you think they are.”

Then of course they land on one of my properties that has a house and I miss their houses again.

C walks over and begins to clean out the junk drawer.

“Don’t you dare clean out that junk drawer!” I said firmly. “This wasn’t how it was supposed to work! I was gonna’ get you guys shamrock shakes regardless!”

Meanwhile my husband is muttering under his breath, “I don’t even know why you try this game with them. It’s always a disaster.”

Thanks for your words of encouragement. I was so frustrated. I just went up to our bathroom and cried.

After I composed myself, I came back downstairs, got my jacket on and announced I was getting shamrock shakes. I think my boys felt bad by now because P said,

“You don’t have to get them if you don’t want to.”

“No, I’ll get them. Just know, I think we are going to wait a few more years till we play Monopoly again. It’s not worth the meltdowns.”

Surprisingly, neither protested. Ok, so lay it on me…..tell me how much you HATE Monopoly and how long it takes. I can take it, I’m a big girl….but if you ever want to play……

I can’t even remember how the topic was brought  up, but I think it was with  Ben’s Bitter Blog. This past weekend at my nightmare motel, I saw more hoverboards than I care to see. Shocking, but it was the kids that were clearly not athletes that felt the need to own and operate a hoverboard.

Admittedly, I was intrigued at first. Hell, my only frame of reference was Back to the Future-II. By the way, do you know that the “future” they were portraying was 2015? I wish the hoverboards would have come about but the real ones that don’t touch the ground.

Now hoverboards are annoying and I want to see their owners fall off. There was one kid who rode it into the pool area despite drenched floors. There was another kid rolling right into the elevator with his. At Kenwood mall there was an adult just rollin’ right out like this was just normal.

Is this our last ditch effort to become THE LAZIEST generation of all time? How does it get any worse then something doing our walking for us? I just sat there for a few minutes pondering what is lazier. The only thing I could come up with is if we found a way to have something sleep for us, while we are doing absolutely nothing. Did I just blow your mind?

So in my mind hoverboards are the Ed Hardy shirts and Blue Tooths of this decade. I loathe both in epic ways. So what are your thoughts? Is this the transportation of the douche and the douchebagette (female version of douche in case you weren’t aware)?

Hot Mess Memoir is a humor blog about all the WTF moments. I cover everything from parenting, oblivious people in the world and everything that annoys us!